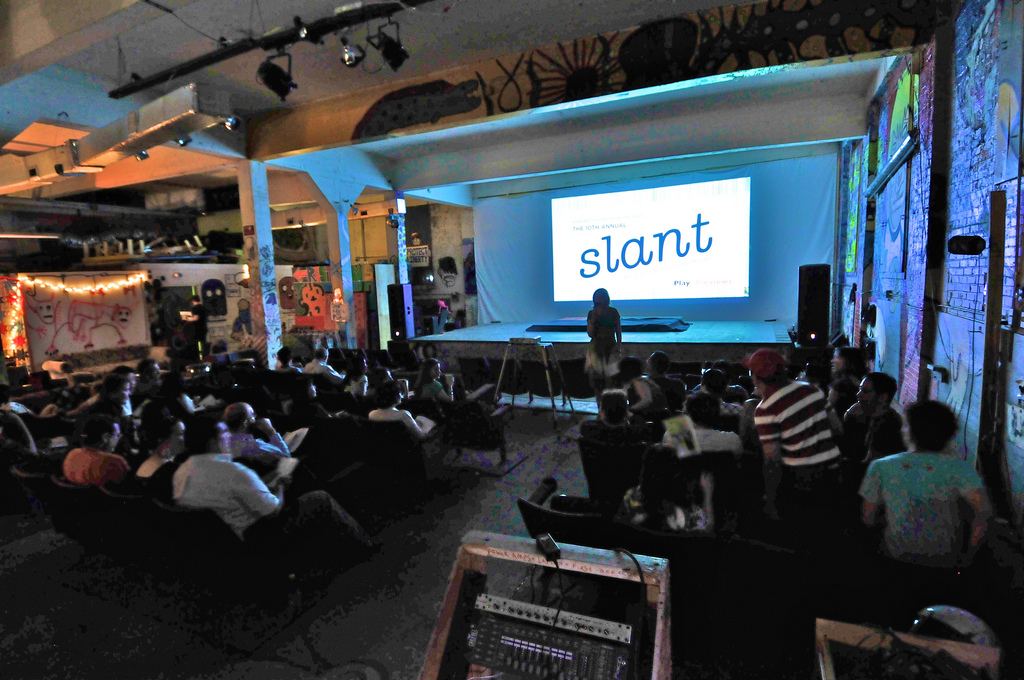 Photo above by Camilo Gonzalez

Q&A after the screening with filmmaker J.P. Chan. Photo by Han Wang

Thanks to everyone who made it out to our 10th annual festival. We had a great time hiding out from the Houston heat by watching intriguing movies and performances indoors. We kicked things off on Friday, May 21 with a screening of 7 short films. Filmmaker J.P. Chan was in town from New York and after the screening he answered questions about knives, his day job, and how he bypassed film school and just started making films.

The screening was held at Super Happy Fun Land, which is a laid back, brightly-colored, chaotically-decorated music venue housed in an old warehouse. Inside, there were murals on the walls, couches, rows of seats reclaimed from a movie theater, pianos, and towers of sock monkeys and Raggedy Ann dolls.

Saturday, the visiting artists for Slant were treated to brunch and a tour of interesting Houston art by the Aurora Picture Show ladies (who are the nicest, friendliest bunch around!). Aurora’s founder, Andrea Grover, led the tour in her van.

That evening we put on The Neo-Benshi Experience, an evening of performances with film. Up first were Neelanjana Banerjee and Robin Sukhadia from San Francisco who performed their own scripts to clips from two films directed by Yash Chopra that starred Bollywood megastar Amitabh Bachchan. (The clips were from the 1981 film “Silsila” and the 1975 film “Deewar.”) It was highly entertaining! Robin’s soundtrack to a fight scene in “Deewar” included a mashup of live tabla with Michael Jackson’s “Bad.”

Robin Sukhadia and Neelanjana Banerjee get their neo-benshi on. Photo by Steve Patlan 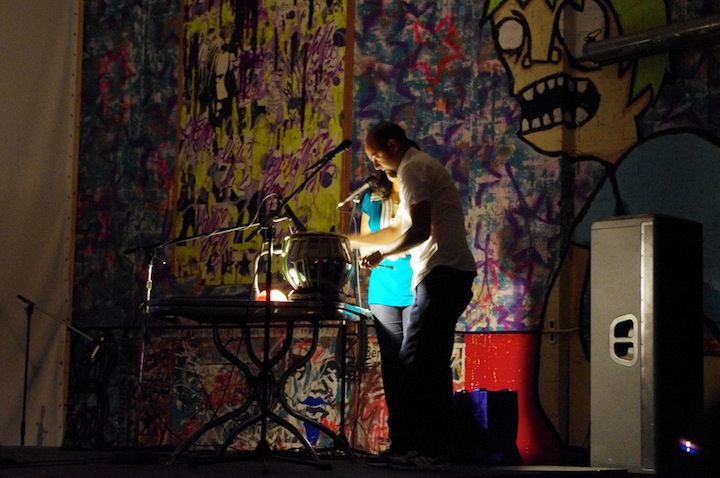 Next up was singer-songwriter Goh Nakamura. We had asked him and filmmaker Dino Ignacio to collaborate on something new especially for Slant. Dino animated a children’s story he wrote called “The Tower of Misunderstanding” and Goh performed a live score to it that was magical. Then Goh played some of his own songs from his albums. (Psst, you can download Goh’s second album for free from his website.)

After a Q&A with the performers, Slant curator Melissa Hung asked Goh and Robin to collaborate on the spot. The two jammed (on the guitar and tabla, respectively) to an imagined fight scene. It ended, happily, in robot dances. 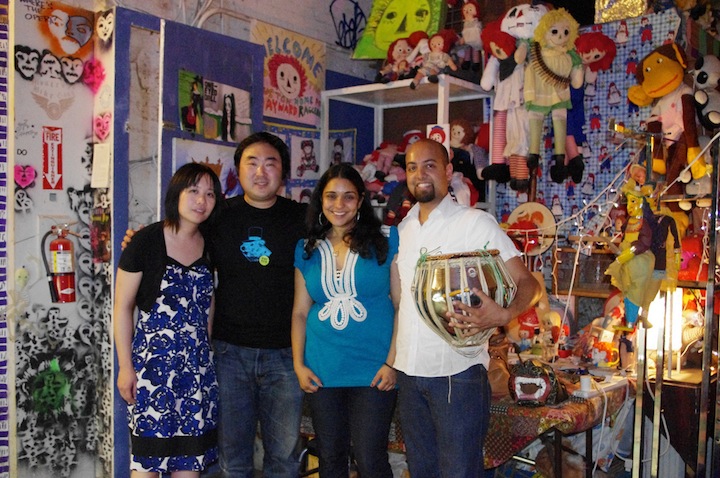 On Sunday, May 23, Austin-based filmmaker PJ Raval gave a free talk at the Aurora Picture Show Video Library about his experiences in niche markets of indie filmmaking, specifically the Asian American and LGBT films communities. He showed a clip from his documentary “Trinidad” and spoke about using niches to his advantage, instead of getting boxed in by them, to get grants and leverage support. Because of his success with “Trinidad,” Raval is now working on a documentary about gay and lesbian retiree communities.

Yes, that’s right: there was a visiting artist named J.P. and another one named PJ. That was initially confusing to some people. Others contended that they were maybe the one and the same and couldn’t appear in the same room at the same time. But we have proof otherwise! 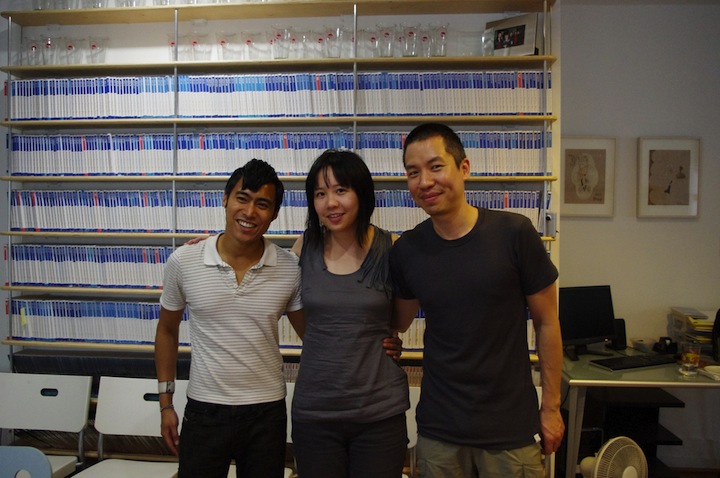 After this last event, the visiting artists took in some of Houston’s museums and delicious Vietnamese sandwiches before heading back to their home cities. Another year of Slant wrapped!

Also, many thanks to volunteer Thao Tran and the many donors who made Slant possible this year.